To facilitate transport, Pompano Circuit shuttles will start to offer free rides for anyone who wants to get around the barrier island of the city. Starting 26th of April, the City of Pompano Beach will be launching a brand new project created with the help of the Florida Department of Transportation. This electric shuttle rides dubbed as the “Pompano Circuit”, the public transport will be operating through the barrier island, covering Terra Mar Drive all the way to the Hillsboro Intel Bridge, east of Intracoastal. For the western side of the Intracoastal, the shuttle service would be operating along Atlantic Boulevard, McNab Park, and then all the way to Southeast 2 Street and Northeast 2 Street.

Each shuttle can carry up to four passengers at any given time. They won’t operate every day though – commuters can expect to see these shuttles from Sunday to Thursday at 10AM to 8PM. During Fridays and Saturdays when people are expected to stay outdoors all through the night, the shuttles would be available from 10AM to 11PM. That’s good news for the party-goers or those who prefer to spend their weekend nights in the club. Even better, the shuttles don’t have a minimum occupancy, which means that you don’t have to wait for it to fill up before moving to its destination. With just four passengers needed for the shuttle to reach maximum capacity, this guarantees minimal waiting time for passengers. As with typical buses, the shuttles will also have designated stops all through the city. 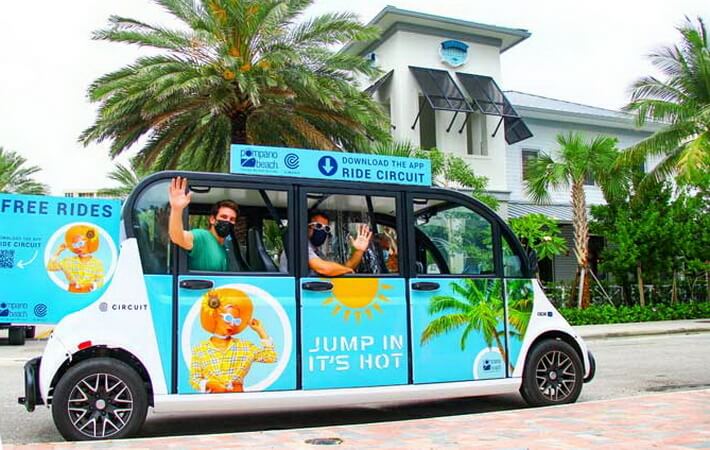 As a nod to the changing times, users of the electric shuttle service can arrange their rides via the “Ride Circuit” app. With the application in their phone, riders can request a pick up at a predestined time. They can also choose to wave down a passing shuttle through the app – eliminating the long waiting lines of public transportation.

The free shuttle service is expected to take a predetermined route through strategic streets and sites of the city. It starts with the opening of new restaurants at the Pompano Beach Fishing Village. Establishments like the Lucky Fish Beach Bar and Grill, BurgerFi, and the confectionary chain Kilwins and Alvin’s Island are expected to open in the area within the month. There’s also the Cannoli Kitchen which already promises a grand opening as the space continues to be worked on. All of these spots are opening their doors just in time for the improve transport service of the city. With the introduction of the free shuttle service, residents and visitors shouldn’t have any problem visiting these new locations – acting as an economic stimulus for the city.

Hail, Sit, and Drop Off

With the convenient app, riders of the shuttle service can expect an easier life with this shuttle service. All they have to do is book a ride through their phones, hop onto the shuttle, and hop out when they’ve reached their destination. There’s no need to wait in long lines, drive through traffic, or even waste precious minutes in finding a parking lot. The shuttle service comes with all the benefits of an Uber without the cost – or the risks – that come with the ride.

According to the City of Pompano Beach, the project received additional assistance from the Florida Department of Transportation in the amount of $833,000. This free public transport will be operating under the guidance of Circuit Transit, Inc. Even better, all shuttles are powered by electricity as opposed to old-school transport services. Currently, there’s a total of four different shuttles servicing the area and running specific routes to guarantee constant presence in the City of Pompano Beach.

The people operating the program – Circuit Transit Inc. – have 10 years worth of experience in offering this kind of service to the public. In fact, they’re known for successfully operating the same service to nearby communities such as West Palm Beach, Ft. Lauderdale, Hollywood, and Miami. The end-goal isn’t just to facilitate transport but to reduce traffic and emission that comes with the use of traditional vehicles.

Currently, the free electric shuttles are limited to just four. Still at the initial phase, there’s no telling if the City of Pompano Beach will be adding more shuttles or stops in the future. Right now however, residents and neighbours alike are encouraged to make full use of this free service and help revitalize Pompano Beach’s many new destinations.

Contact Ed Cook today for all your real estate needs in Pompano Beach.